Archeologists in Sweden recently unearthed a cache of wisp-thin gold foil figures at the Aska archeological site in Hagebyhöga. The delicate specimens, which depict embracing couples and date back about 1,300 years, were found at the bottom of post holes in the remains of a great hall at this historic site. 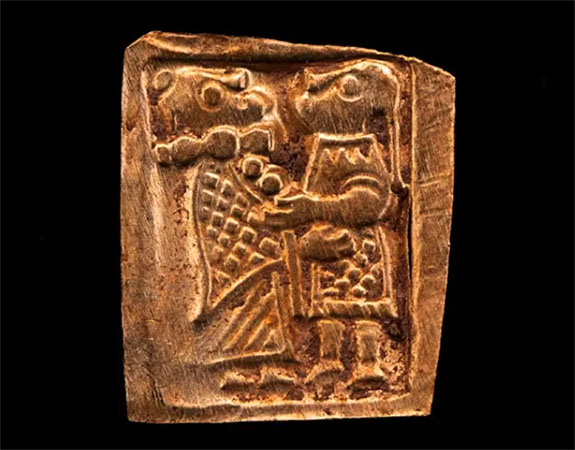 The foil shown, above, was completely unharmed after being buried for more than a millennium. Some foils were badly fragmented. Others were folded with their edges pointed toward the center. Archeologist from the University of Lodz in Poland sought the assistance of a goldsmith to unfold the delicate parcels.

“Our best estimate is that we have 22 foil figures. The exact number is not quite clear because most are fragmented, and there is some uncertainty as to which fragments go together,” Martin Rundkvist, an archaeology professor at the University of Lodz, wrote in a report recently uploaded to academia.edu.

Amazingly, the combined weight of all the recovered foils was 0.76 grams (about 0.026 ounces). 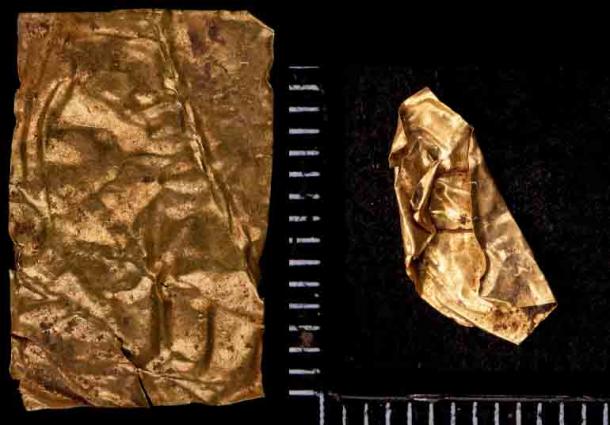 According to Rundkvist, 15 of the foils have been returned to the full original dimensions. Every one of them depicts an embracing couple. The team believes that the foils were once affixed to the upright posts that supported the great hall. Many of the foils were found at the bottom of seven post holes.

There are a number of theories regarding the identities of the couples stamped into the foil. Some believe the couples are gods or goddesses.

“We do know that kings at the time claimed divine descent,” Rundkvist noted. He also speculated that they may depict princes and princesses who were about to get married.

Other scholars believe that the embracing couples may represent the mythological union of the god Freyr and the giantess Gerdr from Norse mythology.

In addition to the gold foils, the archaeologists recovered from the Aska site three spiral “omega” pendants made of iron and two game pieces made of whale bone.