Music Friday: In This Soulful Hit, Anita Baker Bets Everything on Her Wedding Ring

Welcome to Music Friday when we bring you sensational songs with jewelry, gemstones or precious metals in the title or lyrics. Today, we present the soulful Anita Baker singing her biggest hit, “Giving You the Best That I Got.” 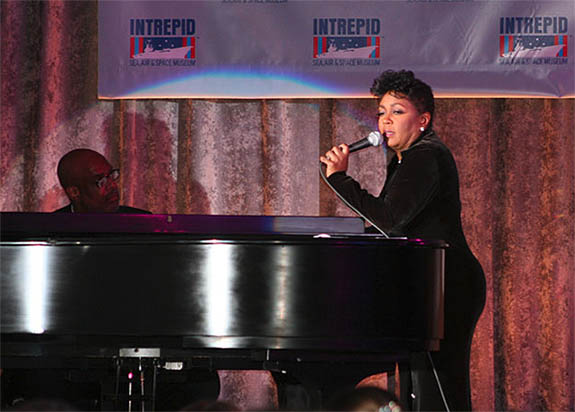 In this entrancing love song, the eight-time Grammy Award winner tells her husband how much she loves him, how she feels at home in his arms, and how, together, they can calm a stormy sea. Others believe the relationship will fail, but she’s convinced that it will stand the test of time. In the last verse, she makes a solemn vow: “I bet everything on my wedding ring / I’m giving you the best that I got.”

“Giving You the Best That I Got” appeared as the third track on Baker’s 3x platinum album of the same name. The song, which was co-written by Baker, Randy Holland and Skip Scarborough, yielded a whopping five Grammy nominations and three Grammy Awards — two in the exact same category in back-to-back years (We’ll explain).

In 1989, Baker won Grammys for Best Female R&B Vocal Performance, Best R&B Song, and earned nominations that year for Record of the Year and Song of the Year.

According to songfacts.com, Holland originally wrote the song as a personal commentary about his struggles breaking into the music business. It wasn’t a love song at all. He was simply giving the best that he got to get his career off the ground. When Baker heard the song, she immediately felt a connection because she had just become engaged to be married. She asked to record it as long as she could speed up the tempo and add some personal touches to the lyrics.

Born in Toledo, Ohio, and abandoned at the age of two, Baker was raised by a foster family in Detroit until she was 12. Sadly, both her foster parents died and Baker went through her adolescence in the custody of her foster sister.

By the age of 16, Baker was singing R&B at Detroit nightclubs, where bandleader David Washington recognized her talent. He encouraged her to audition for the band, Chapter 8, and she soon landed a job as the group’s lead singer.

When Chapter 8 was dropped by Arista in 1979, Baker headed back to Detroit, where she worked as a receptionist and a waitress. Three years later, based on the encouragement of record executive Otis Smith, Baker embarked on a solo career. In June 2018, Baker accepted BET’s coveted Lifetime Achievement Award.

Baker, who turned 63 on January 26, continues to have an active career.

Please check out the official video of Anita Baker’s “Giving You the Best That I Got.” It’s been viewed on Youtube 21 million times and the lyrics are below if you’d like to sing along…

Somebody understands me
Somebody gave his heart to me
I stumbled my whole life long
Always on my own, now I’m home

My weary mind is rested
And I feel as if my home is in your arms
Fears are all gone, I like the sound of your song
And I think I wanna sing it forever