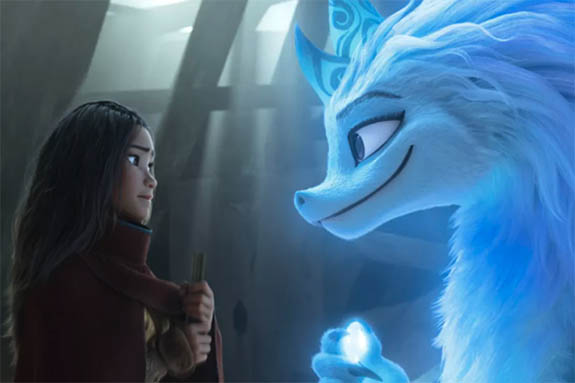 The stone is a symbol of power and peace in the mythical land of Kumandra. When the stone is fractured, its powers dissipate and the peaceful land becomes vulnerable to the nasty Druun (amorphous, dark purple and black clouds) that have the power to turn their enemies into statues.

In the mythical land of Kumandra, 500 years ago, humans and dragons lived peacefully, but when their land is invaded by the Druun, the dragons sacrifice themselves to save the land and their two-legged friends. The dragons leave behind a glowing, orb-like stone that has the power to keep the Druun at bay. They also leave behind a single dragon named Sisu, who hides away.

Five centuries later, we find the land of Kumandra in turmoil. The divided territory is now run by rival factions. Benja guards the precious dragon stone, but his rivals believe incorrectly that his control of the stone has delivered great wealth. Benja teaches his young daughter, Raya, how to protect the stone. But the youngster is tricked by Namaari, the daughter of the powerful rival, Virana.

The orb is compromised and fractures into several pieces, ruining its ability to hold back the lurking Druun.

The beautifully animated and skillfully voiced movie follows a grown-up Raya and the last dragon (Sisu) as they try to reunite the pieces of the dragon stone while being chased by Virana and Namaari.

As each fragment is collected, Sisu gains the power of one of her fellow dragons and becomes more confident in her abilities. The overall messaging is that of trust, cooperation and compromise for the greater good.

The PG film earned a 96% rating on Rotten Tomatoes. It runs 1 hour 54 minutes and can be seen in theaters and on Disney+.