The Kansas City Chiefs received their championship rings on Tuesday during a socially distanced private celebration at Arrowhead Stadium. Each Super Bowl ring features 255 diamonds and 36 rubies for a total gem carat weight of 10.85 carats. 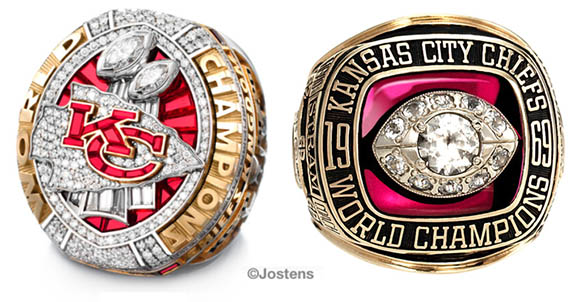 For 60 seasons, the Kansas City Chiefs have been proud defenders of the Chiefs Kingdom. The ring face pays tribute to this legacy with 60 diamonds set inside a stunning arrowhead-shaped adornment. The arrowhead is layered over two Lombardi Trophies, each of which is topped by a marquise-shaped diamond.

The letters KC are outlined in yellow gold and shimmer with 16 custom-cut rubies that represent the franchise’s 10 AFC division titles combined with six playoff appearances under Head Coach Andy Reid. The 50 diamonds that surround the rubies and logo signify the 50 years between the team’s Super Bowl victories.

The four baguette rubies on the top and bottom edges of the ring symbolize four straight AFC West titles from 2016 to 2019. An additional 122 diamonds cascade along the ring top edges, calling to mind the 100th season of the NFL and the Chiefs’ 22 playoff appearances. Wrapping it all up, the words WORLD CHAMPIONS crafted from contrasting yellow gold, appear on the ring’s outermost edges.

The right side of the ring pays tribute to the fanbase with the words CHIEFS KINGDOM in raised yellow gold lettering. Located directly in the center, the Super Bowl LIV logo is set in white gold surrounded by a banner displaying the championship game’s final score, 31 to 20. The right side is completed with the championship year date, 2019.

On the left side of the ring, the ring recipient’s name is spelled out in raised yellow gold lettering. Below, flags that capture the ’69 and ’19 Super Bowl victories fly high alongside the player’s number set in diamonds. BE GREAT, the team’s championship season motto, is set in a banner beneath, followed by the numbers 142.2, the decibel rating that makes Arrowhead Stadium the loudest in the world, according to the Guinness Book of World Records. All of this is given definition by the stands seen at the very bottom, evoking a fan’s view from the stadium seats.

Etched inside the ring are the logos of the teams that were defeated by the Chiefs on their Super Bowl journey. Also shown are the scores of the games and the deficit overcome to secure the win. As an added touch of personalization, each player’s individual signature graces the interior. The final detail of the ring is a football located on the outer band, which features the initials LH, a tribute to franchise founder Lamar Hunt, who passed away in 2006.