At first glance, the shiny yellow stone that emerged from Steven McCool’s 11th — and last — bucket of the day at Crater of Diamonds State Park seemed to be a well-worn piece of amber-colored glass. But then it quickly dawned on the Fayetteville, AR, native that the jelly-bean-size curiosity was something very special.

“As my eyes were panning to it, I was thinking it could be an amber piece of glass like an old Coke bottle,” said McCool. “Once I focused on it, though, I knew it was a diamond. I was like ‘No way! No way!’”

The self-proclaimed “newbie” at diamond hunting put his treasure in a safe place and continued wet sifting the rest of the dirt he collected in the Canary Hill area of the park. It was nearly closing time, the water was ice cold and his gloves were completely soaked through.

A few minutes later at the park’s Diamond Discovery Center, the 34-year-old didn’t need any help validating his find.

Said McCool, “I went up there and was like ‘Where do I register my diamond?’”

It turns out that McCool’s assessment was right on the mark. 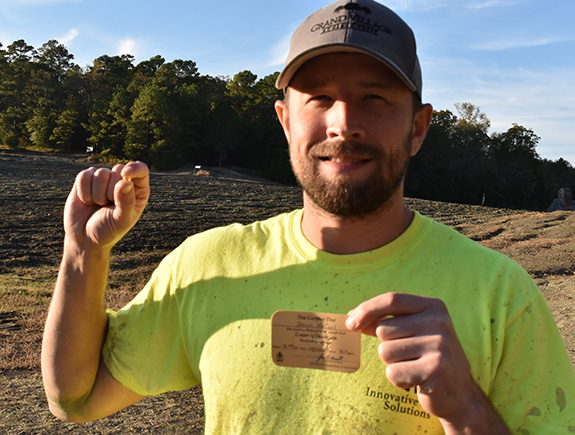 “Mr. McCool’s find is a 4.49-carat sparkling, canary yellow diamond that is about the size of a jelly bean and seems to have great clarity,” said Crater of Diamonds State Park Assistant Superintendent Meghan Moore. “It is a stunning diamond.”

This was McCool’s fifth trip to the only public diamond mine where novice prospectors get to keep what they find. He had been visiting the Murfreesboro area, which is about 200 miles from his home, and extended his stay by one day because there had been a lot of rainfall recently, which made the conditions ideal for finding a diamond.

Moore said that it is very unusual for a visitor to find a large diamond while wet sifting.

“It is extraordinarily rare to catch a diamond in the top screen of a screen set,” said Moore. “The mesh size of the top screen is larger and typically used to catch and remove bigger pieces of gravel – not diamonds. The average diamond size found wet sifting is a quarter of a carat. Typically, larger diamonds are found by surface searching.” 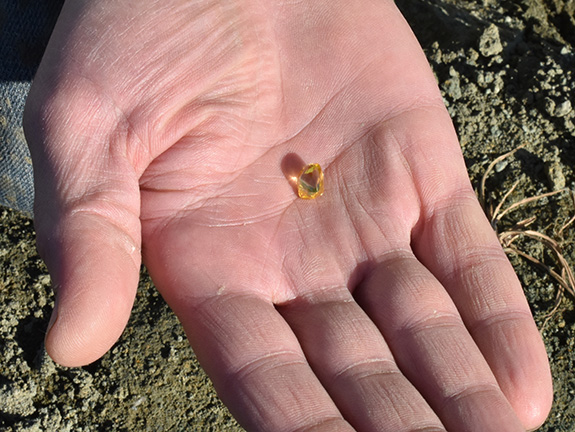 McCool named his diamond the “BamMam Diamond,” which is a combination of the initials of his 7-year-old son and 5-year-old daughter.

“What’s more precious than a precious gem? My children,” said McCool. “So, I named it after my children and the name will stay with the diamond forever.”

McCool told park officials he hasn’t decided whether he will keep it or sell it.

“I’m torn. I’m somewhat sentimental. It’s [the] first diamond I found. I am the first person to unearth this, the first person to touch it. It’s hard to wrap my head around it. I am blown away by the clarity, the beauty, how rare it is. I’m definitely blessed, not lucky. It was the Lord’s work,” he said.

Admission is currently limited to 1,500 tickets per day due to COVID-19 restrictions. Visitors are encouraged to purchase tickets in advance.